The Ministry of Foreign Affairs and Trade's Arun Jain received the prestigious Westpac New Zealand Spirit of Service Scholarship this year. He is now studying towards a Master of Public Policy at Oxford University. Here, for Public Service Day 2019, he reflects on his first month.

The course he is undertaking is highly sought after, with only 120 of 800 global applicants from 50 countries accepted. The nomination and application process included having to be accepted to Oxford University before being considered for the scholarship. 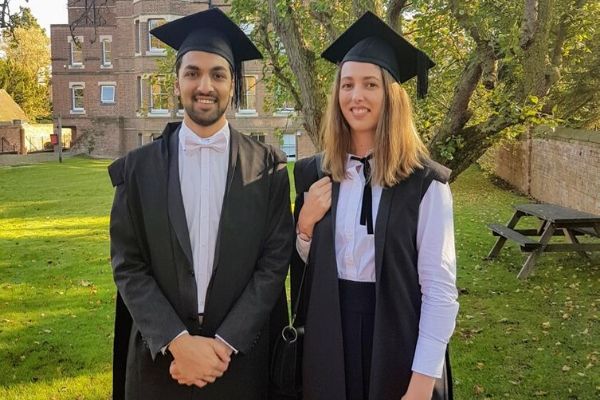 Arun Jain, with Tennille Maxey, the other recipient of the Westpac Spirit of Service Scholarship.

My first month in Oxford has passed in no time at all and yet somehow, in the best way possible, it feels like I have been here forever.

Days at Oxford are dominated by a cocktail of lectures and policy challenges, seminars delivered by former world leaders, innumerable extracurricular opportunities and a bite-sized but fascinating city. Routine and downtime have been rare commodities so far when there are such endless diversions on offer. One thing I’m trying out this term is college rowing, so far with mixed success.

Autumn here looks a lot like Wellington’s – moody, cold and wet. Our lecturers joke that we shouldn’t worry too much about the short winter days because we’ll be spending all of it indoors studying either way. Hilarious.

That said, for now at least falling orange leaves against the backdrop of centuries old buildings and the cosiness of pubs that JRR Tolkein used to frequent make for a welcome distraction.

Getting to know the other students in the Blavatnik School of Government has also been a treat.

There are 124 of us from 50 different countries studying together, and each one already has incredibly impressive achievements to their name. It’s surreal to find yourself friends with a woman who founded Afghanistan’s first girls’ boarding school at age 17, Colombia’s youngest Vice Minister, or a Nigerian development practitioner who helped free 1,500 children from Boko Haram.

And what’s more, for many the course is just a stepping stone to even more extraordinary things including running for public office.

Being surrounded by young leaders and changemakers in a forum like the School lends perspective to the pride and importance attached to public service. People are working in pretty extraordinary ways to make the world and their own backyards a better place, often at immense personal sacrifice. I can already tell that the people I meet here are going to be a major inspiration and highlight of this year at Oxford.

Statement by Friends of the Covax Facility (FOF)
22 Sep 2020